As discussed in a previous article (How to Connect SystemVerilog with Python), functional verification may require an interaction between the testbench and components written in various programming languages. The above-mentioned post describes a method for connecting SystemVerilog with Python that assumes a one-to-one relationship between the sent and received packets. This implies that the communication is occurring in a one-way direction (master -> slave), where only one of the connection endpoints is capable of initiating information transfer (SV in this case).

This article shows how you can achieve communication between components written in different programming languages without any dependency between the sent and received packets.

The solution is based on 3 different layers, which are explained in more detail below. 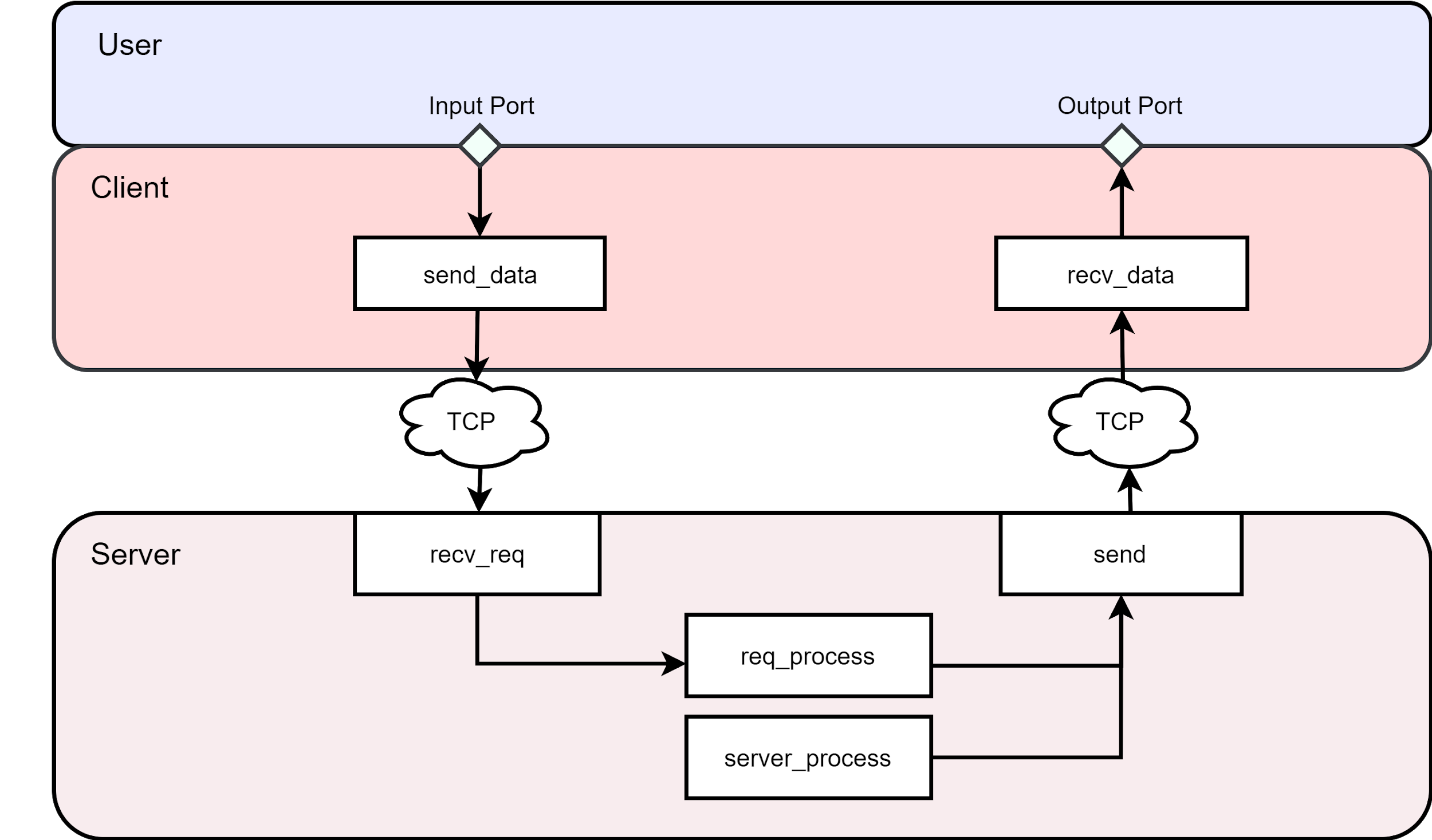 As shown in Figure 1, the three layers constituting the non-blocking communication (the Client does not wait for the Server and vice versa) are:

The Client layer acts as a proxy between the User Layer and the Server Layer.

As such, a TCP connection with the Server is created from within this layer.

SystemVerilog does not provide native support for TCP sockets, thus some functions used in this architecture are implemented in C++ and called through DPI-C.

This layer is based on a structure called Connection that is used whenever a data transfer is required between the client and the server. This structure has three main functionalities:

First, in order to handle transfers between the two components, there needs to be an established connection through which data can be sent and received. This connection is initialized from the client side by creating a socket and connecting to the server’s IP address on the designated port number.

Once established, the connection is kept active until the end of the simulation, allowing it to be used whenever a transfer takes place. This means that the Client Layer is required to perform the connection configuration only once.

To set up the connection, the user must call the configure() function, passing the server’s IP address and port number as arguments:

The implementation of the configure() function can be seen in the following code:

After configuration, all the exported global DPI-C functions operate on a Singleton instance of the Connection structure so that the same connection instance is reused for all operations during the simulation.

Sending a message to the server is straight forward: all that needs to be done is to call the do_send() function with the message (as a string) and its length as arguments.

On the other hand, the receive functionality requires a new thread to be started that waits for messages from the server for as long as the simulation is running. This can be done by forking the recv_thread() task after the configuration is done.

Calling the recv_thread() task from SystemVerilog triggers an infinite loop that waits for messages from the server through the do_recv() function. This loop is part of the do_recv_forever() function and it only ends at the end of the test.

If the do_recv_forever() task does not consume simulation time, the simulator will execute the loop over and over without rescheduling other execution threads. The best way to fix this problem is to consume simulation time when no data is being received. That way the simulator has the opportunity to schedule other tasks. For this reason, the consume_time() task is exported from SystemVerilog to the DPI-C layer.

When a message is received in do_recv(), the recv_callback() function is called in order to save the message in a queue accessible to the User Layer and to trigger an event to notify that something was received.

This function is implemented in SystemVerilog and imported into the DPI-C layer. 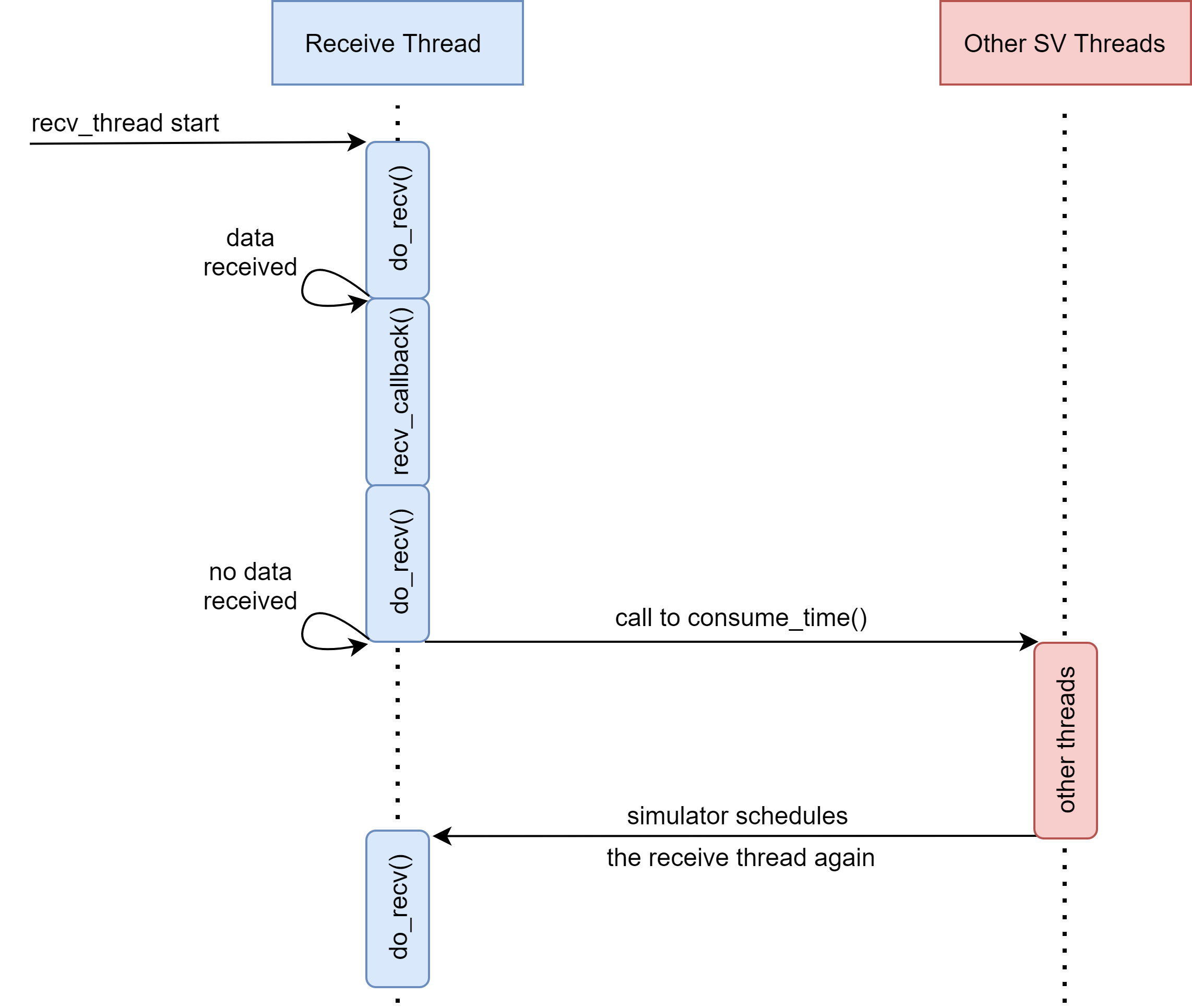 The server constitutes the external component that communicates with the SystemVerilog testbench. After the connection has been configured by the client, the server can process requests from the testbench or initiate a transfer independent of a client request.

The programming language used to implement the server and whether it is blocking or non-blocking is dictated by the needs of the project. For the example project described below, I used a blocking Python Server. The structure of the server is the same as that presented in the article How to Connect SystemVerilog with Python.

To illustrate the architecture described above, I created an example project in which the SystemVerilog testbench is connected to a Python server.

To handle the connection between the testbench and the Python server, I created a class (amiq_server_connector) which takes as parameters the IP address of the server, the port, and the character used to delimit items within a message. This class contains a start() function that is responsible for initiating the connection between SystemVerilog and Python and for starting the receive thread. The amiq_server_connector communicates with the testbench through two mailboxes:

The SystemVerilog testbench generates items containing two fields – command and data – which are then sent to the Python Server. Depending on the command received, the server may or may not send a message back to the testbench. Either way, the SV testbench does not need to wait for a response before generating the next item.

The three commands used in this project are:

Upon receiving the “div” command associated with a value, the server sends back a series of messages, each of which contains a divisor of that number. If the command “nop” is received, the server does not send back any response. The “end_test” command is used for the “end of test” mechanism.

Figure 4 shows the data flow for three packets generated in the User Layer. Each packet is received and processed by the Python server according to the command received. The first and the last packets do not have an associated response, since the command is “nop”. The second packet, however, contains a “div” command and a number that has three divisors. Therefore, the Python server will create three messages, each containing a divisor of the number contained in the request. Note that the “SV Send” thread can send packets one after another, regardless of the time required for the Python server to process received packets. 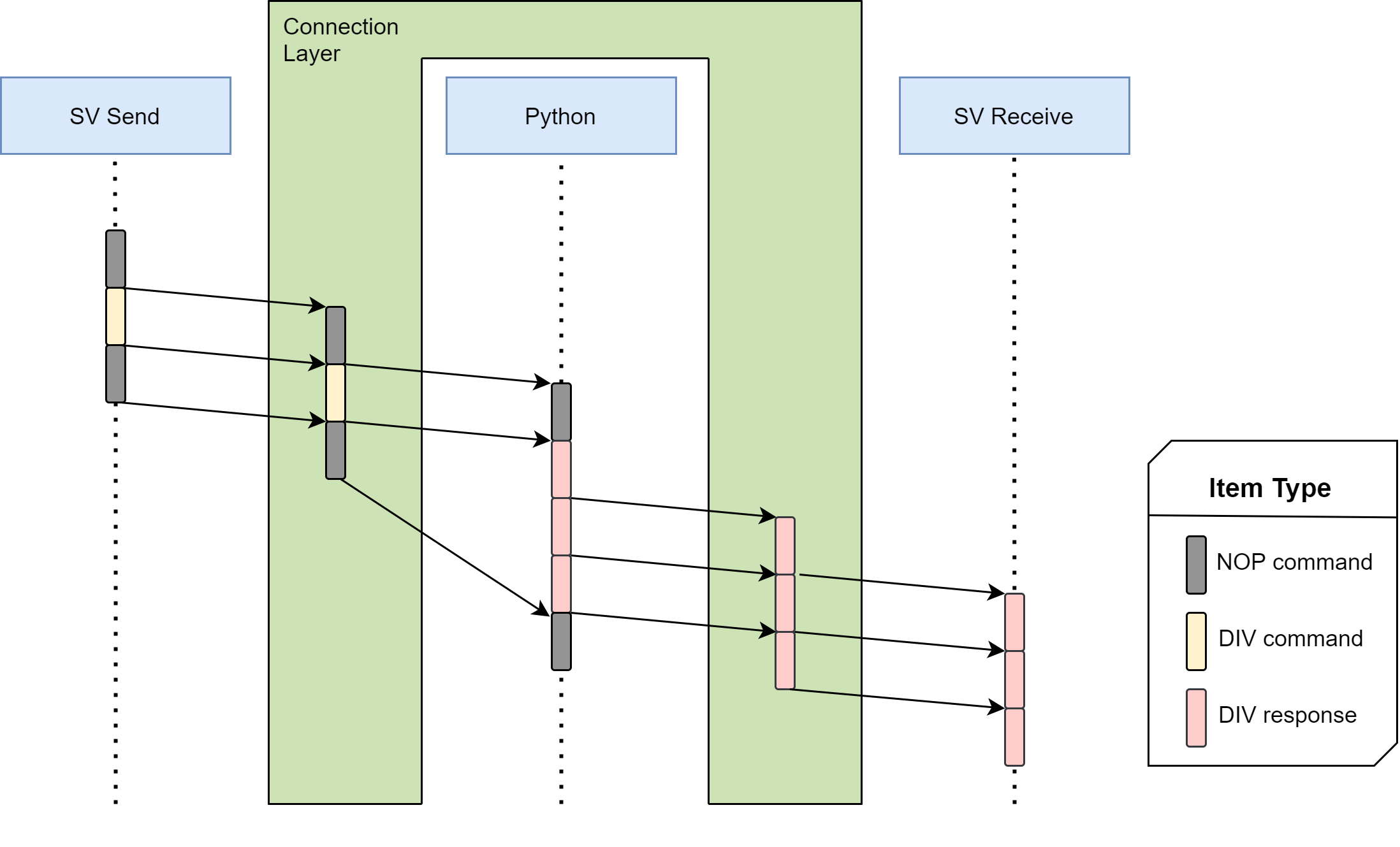 The “end of test” mechanism is based on the sending of a specific command, which, after being processed by the server, generates a response that the client will recognize. When the testbench recognizes this response in the received message, the test is considered finished.

The User Layer for the example project looks like this:

You can run this example using one of the three major EDA vendor simulators.

You can download the project from AMIQ’s GitHub repository.

To achieve a non-blocking connection, a receiving thread needs to be started in the DPI-C layer and the simulator needs to be explicitly told when to make a context switch to avoid blocking the simulation.
As the simulation is dependent on an external component, an end of the test mechanism can be implemented based on the server’s response to a specific testbench message.