How to Connect SystemVerilog with Python

SystemVerilog is not able to communicate directly with Python. Instead, the SV code first needs to talk to a C code via a DPI-C, with the C code then able to talk to the Python code. A SystemVerilog-Python connection, therefore, needs to follow certain guidelines, otherwise, the communication will fail. A connection of this kind is shown in the diagram below.

This interconnection is made up of 4 layers:

The User layer is where the main verification activity takes place. It is the User layer that initiates a connection with another code written in a different programming language. The first step when initiating a connection is to invoke the call_client() function from the Client layer using the address and a port number of the server. Optionally, we can provide a message for the Server.

I will provide more detail on this in the Example Project section below.

The connection between SystemVerilog and Python works like a Client-Server application connecting 2 entities. The handshake and communication flow between the Client and the Server are shown in Figure 2 below.

In this Client-Server architecture, we are going to use a concept known as socket, which is an endpoint in a network. A socket is bound to a port of the machine where the application is running. 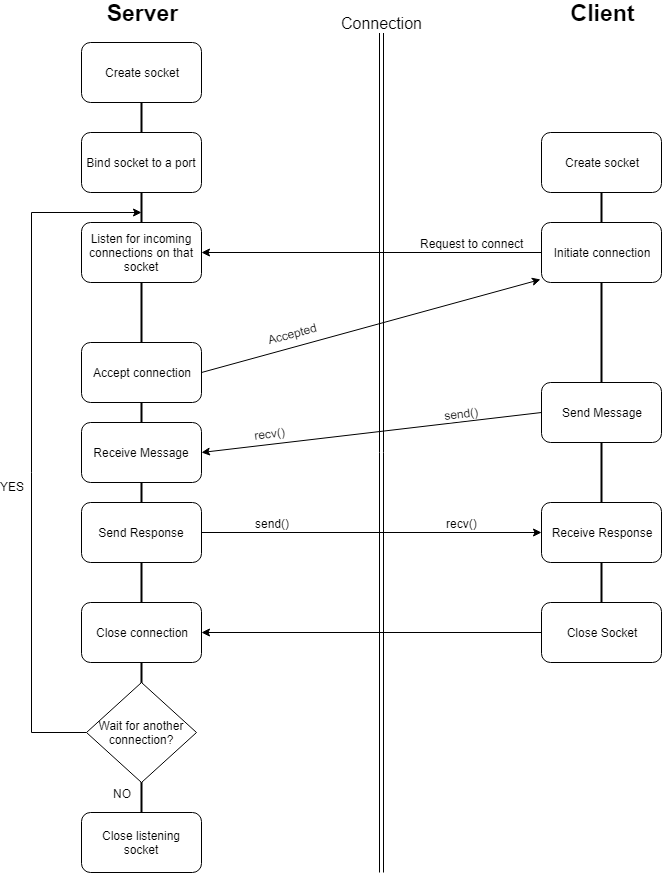 Please note that, as depicted in the diagram, the communication must be initiated by the Client. The Server can not initiate communication on its own.

The Client layer acts as a proxy between the User layer and the Server layer. A connection with the Server is initiated from within this layer. The Client and the User layers are connected via the DPI-C. For more information on the DPI-C, please refer to this article.

The C code for the Client layer looks like this:

During Step 1, a TCP socket is created and its descriptor saved into a variable for later use.

During Step 2, the client prepares the connection data by:

During Step 3, the connection is established using the connect() function.

During Step 4, the Client is ready to communicate with the Server. It sends a message using the write() function and waits for a response from the Server by using the blocking read() function.

During Step 5, the Client is responsible for closing the connection.

The Server layer is responsible for providing a response to a User request.

In my implementation, the Python code for the Server logic is as follows:

During Step 1, a TCP socket is created and bound to a port. When binding the port, the developer must choose a port number and may provide a filter for incoming network connections. For more information on Python sockets, please refer to the following link.

During Step 3, the Server enters the listening loop. If a new connection is accepted, the Server’s accept() method returns the connection ID and the IP address for the Client.

During Step 4, I chose to implement a simple function for receiving a maximum of 512 bytes from the Client. Depending on your application and your Server implementation, this step may be implemented differently, e.g. you may want to receive multiple BUFFER_SIZE bytes data and concatenate them for further processing.

During Step 5, the response of the Server is generated and sent back to the Client.

During Step 6, the Server releases its connection handle as a result of the Client ending the communication.

To illustrate the above architecture I have implemented a short demo testbench for the verification of a MUX RTL function.

The basic idea behind this example is to receive the RTL stimuli data from Python. The stimuli are represented by the inputs (in0, in1, sel) and the delays between two consecutive data stimuli.

The stimuli are received as a string via a call_client() DPI-C function. The message_decoder() function then interprets the received string content and saves the decoded data into packed_stimuli

The test ends when all the received stimuli have been driven to the RTL. The source code for the application can be downloaded from here.

You can run the example using any of the three major EDA vendor simulators (irun, vlog/vsim and vcs).

Why use sockets and not other methods?

Sockets
The advantages of using sockets are:

The main disadvantage of using sockets compared with Shared Memory and DPI is application performance, i.e. it takes longer to receive data from the communication partners.

Shared Memory
An alternative to the aforementioned socket communication method between SystemVerilog and Python involves the use of shared memory. In this case, the performance of the application should improve as the delays introduced by socket communication would vanish. However, there are also some disadvantages of using this method:

DPI
Another way of doing things would be to use a DPI between the C/C++ layer and the Python layer (e.g. pybind11). While this should improve the application’s performance, it too has drawbacks:

This kind of communication between SystemVerilog and Python can be used in data analysis and GUI development, etc. The architecture presented above provides a generic solution allowing you to focus exclusively on the cross-language data encapsulation.

One could also have e-language communicating with Python, instead of SystemVerilog. I will detail how to connect e-Language with Python in a follow-up post.

Please let us know in the comments section below what kind of applications you envisage in the context of SystemVerilog and Python.

Do you have any examples about communicating python and e?

Check out my new article on the blog: How to connect e-language with Python.

Wouldn’t it be easier to embed the python interpreter in C/C++ and then use DPI-C calls from SV to run python code directly?
(see https://docs.python.org/3/extending/embedding.html)

If you try the “Very High Level Embedding” solution you would reduce the C glue logic to a minimum as it would only be responsible with passing Python code from SV to the Python interpreter. You could then use JSON or other human readable formats to pass messages between SV and your Python application making the debugging easier. And if you want to run your Python app as a background process, you can do that from Python using the Process module. Then use Queues or Pipes to send messages to/from the Process…much easier to work with than sockets.(see https://docs.python.org/2/library/multiprocessing.html)

You could use a similar approach with other interpreted languages like Lua, Tcl, Javascript, etc.

Not sure I fully understand your comment, but if by “embed the python interpreter in C/C++” you mean to use a DPI (Direct Programming Interface) then this is mentioned in the article under the section: Why use sockets and not other methods.

The DPI method is an alternative to the socket approach, but it has some limitations. For example if you want that SV threads and Python threads to run in parallel for the whole simulation time you will have problems. This is because DPI-C function calls are blocking for the SV threads. Some applications (with client and server running on different machines) require that both language threads to run in parallel and not to wait for each other.

To embed the Python interpreter means to instantiate it in C/C++ and send Python code to it in the form of C/C++ strings. That code will be run by the Python interpreter. You can then send those code strings from SV to C/C++(via DPI-C) and then from C/C++ to Python(via the interpreter instance).
Here’s an example from the Python documentation(https://docs.python.org/3/extending/embedding.html):

This solution would fall in your "Shared Memory" category only that the C/C++ layer in this case is very easy to create and debug.

Thank you, I will have a look at Cocotb.
Until then, can you detail a bit to which part of Cocotb you refer to?

Dear Cristian,
>Until then, can you detail a bit to which part of Cocotb you refer to?

>>Wouldn’t it be easier to embed the python interpreter in C/C++ and then use DPI-C calls from SV to run python code directly?

This is how Cocotb works to some extent (with VPI). https://cocotb.readthedocs.io/en/latest/introduction.html#how-does-cocotb-work

Thanks for such beautiful blog.

My question is interacting sv to python through c/c++ seems to time consuming process.

What is the advantage here?

I am glad to hear that you liked this post.

When using sockets, the Python and SV are 2 different processes at run-time that communicate one to another via messages (as a Client-Server application does). The big advantage introduced by this method is that the Python process can store its own variables, so one would not have to bother to load the Python variables from somewhere or to interface them with Python as it must be done in the other 2 cases (see here). Moreover, running this both processes in parallel may improve one’s application performances even though the communication between these 2 processes introduces delay. That depends on the amount of calculus that needs to be done by the Python process (i.e. as it must be done by a Machine Learning algorithm).