YAMM – Yet Another Memory Manager

Ionut Tolea and Andrei Vintila presented the paper Yet Another Memory Manager (YAMM) at SNUG Conference 2016 – Munich. The code of YAMM library is released to the public using AMIQ’s GitHub repository.

Yet Another Memory Manager (YAMM) is a SystemVerilog library that provides support for memory based operations:

Beside these features YAMM provides debug facilities (e.g. memory map dump, usage statistics) and it is easy to integrate it with existing verification environments.

The memory map is initialized to a free buffer. To use a specific area in the memory you must allocate a buffer with a non-0 size. By allocating buffers in the memory, the initial free buffer is split and resized to make room for the new buffers as the example below shows.

Structurally YAMM handles the memory map as a chain of free and occupied buffers managed as two double linked lists (see picture below): 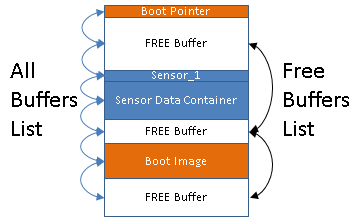 The following sections will present YAMM’s API through examples in order to get a basic understanding of the YAMM capabilities. Also, as a new user you should have a look at the yamm_tutorial.sv example.

Define a memory map by instantiating the yamm object and calling the build() function. At this stage the memory has a name and a size and contains one free buffer that stretches the whole memory space.

Buffers can also be “manually” inserted at a specific address by using one of the insert methods (e.g. insert(), insert_by_access()). In this case the memory manager will only check if there is enough space at the given address and do the buffer insert.

You probably noticed that buffers get a type name through the set_name() call. Although this operation is not mandatory, it can be helpful if you need to search buffers by type.

The verification components should deallocate buffers as soon as they stop being used. This can be achieved by calling deallocate() for a buffer or deallocate_by_addr() for an address.

Once a buffer is allocated by a verification component it can be searched and used for various purposes (e.g. configuration, checking, payload retrieval) by other verification components. YAMM provides a search API that accepts as search criteria an address, an address range (or an access) or a buffer type. Depending on the search operation a buffer or a list of buffers will be returned; if the search is unsuccessful a null buffer or an empty list will be returned.

If the method get_contents() is called without previous initialization of buffer’s contents, it will automatically call the generate_contents() method.

UVM provides a memory model that comes with a simple memory manager called uvm_mam (see Memory Allocation Manager). We used uvm_mam as a reference for feature and performance comparison purposes.

We measured the performance using the following scenario:

After running the performance test I obtained the following statistics graphs. 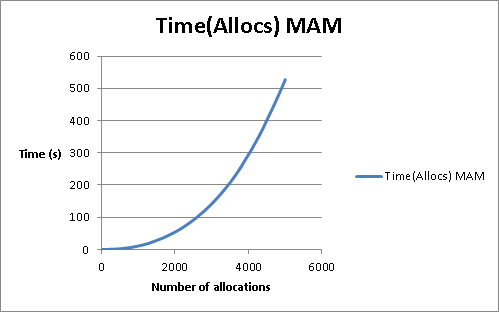 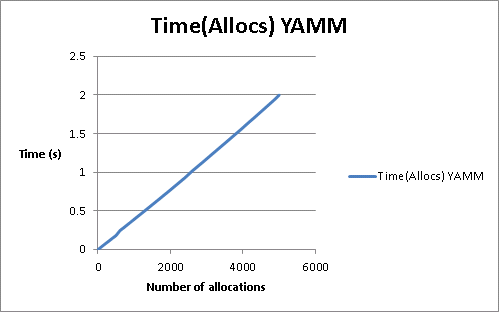 The measurements show that allocation of 5000 buffers takes 2 seconds for YAMM compared to MAM which takes 525 seconds. Also the curve that dictates the time dependency with increasing number of allocations is linear in case of YAMM and exponential in case of MAM.

The YAMM code is provided as an opensource library under Apache License 2.0.
You can download the YAMM library from GitHub.
For getting up to speed you can download YAMM’s User Manual or browse the HTML documentation.

YAMM library is ready to be used for SystemVerilog/UVM-based verification right away. Our roadmap includes few items:

hello!
great pkg for memory allocation. helps a lot.
I think i saw a bug in the allocate_by_size func:

It doesn’t copy also the configured granularity/start_addr_align, so I get an irrelevant address.

what do you say?

Firstly, sorry for such a late response.

You are correct, there is no way at the moment to use the allocate_by_size() function with different granularities. Conceptually speaking, we don’t want to force the granularity of the above layer of buffers on the sub-buffers. That can be already be done by using allocate() or insert() of buffers created by you. Any granularity can be used.

I can have a talk with some other users and eventually, i can provide a new argument to the function that would incorporate the functionality you suggested (e. g. port the same granularity as the buffer on the layer above). At the moment my idea would be to keep the default functionality “as is”, but if nobody objects, i can also change it permanently the way you suggested.

I can get back to you once the git version was updated.

thanks for your response!
the fixed that i offered works well for me..

another issue i’ve found, is that when i use allocate_by_size, the given buffer is not in: start_addr-end_addr range, but in: 0:size range.
is this in purpose?

Sorry for the late reply, it’s been a difficult period.

Unfortunately, you are correct, when building a memory, only the size and end address are taking in account. For our own projects we use our own interchangeable offsets when accessing different memories, especially since we also have other misc access rules. For this purpose, the offset for the created memories has been left as 0, to not conflict with user defined adaptation layers.