In this post I will explain how to analyse the DUT’s data flows and represent them graphically in an intuitive way.

I use data flow analysis to create meaningful diagrams to be included in the verification specifications(e.g. see How To Read a Specification, section Read the spec with a meaningful goal).

You won’t need more than a pencil and some paper to get started.

A data flow is a sequence of transactions with functional and temporal dependencies between them. A data path is a set of input and output interfaces(either internal or external) on which the transactions of a data flow are observed.

Data flow analysis is a transaction level analysis, which means that you can ignore the small details of protocol implementation(i.e. timing, transaction structure etc.) and focus on high level aspects(i.e. operation, dependencies).

The example DUT is a generic communication controller that transfers data between two systems under the control of a CPU. The DUT has two interfaces(i.e. RAM, EXT_*) for data transfer and one interface (i.e. CTRL_*) used by CPU to request transfers.

The CPU can send/receive control transactions over the CTRL_IN interface in order to:

On the CTRL_OUT interface transactions can be:

On the RAM interface transactions can be:

On the EXT_OUT/EXT_IN interface transactions can be:

You can create a table-based representation of the data flows by following these steps:

You should get a table like the one below:

The table is intuitive, it shows the relation between cause- and effect-transactions, but it misses to illustrate the time dependency (i.e. the sequencing) between transactions. No worries, the next section should help.

You can transform the table into an UML sequence diagrams which will also include timing/sequencing information.
You need to represent a lifeline(i.e. a vertical line) for the DUT and one for each of the interfaces. The next step is to connect the various transactions of each data flow with horizontal lines. You can create one diagram for each data flow or group more data flows into a bigger diagram.

In the figure below I illustrate the UML sequence diagrams for three data flows triggered over the CTRL_IN interface: 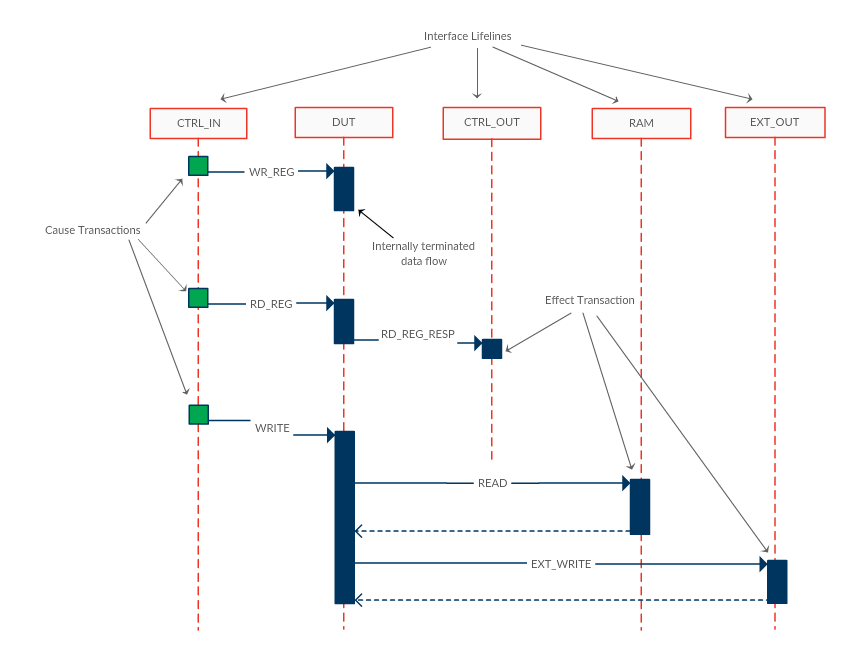 There are few exercises you can solve as further study:

What is the tool you used to create these diagrams? You can find more data flow diagram templates and examples in creately diagram community.