AMIQ is pleased to announce version 2.0 of the SVAUnit framework!
Highlights of SVAUnit 2.0 release are:

Let’s go through the details of each improvement.

Support for sequence based scenarios

This approach allows one to drive stimulus either from a sequence and/or by directly applying stimulus to the interface.
A unit test is required to instantiate, create and start the sequence, as the following example shows:

Users can also directly register sequences, which should inherit svaunit_base_sequence, as SVAUnit tests. A test class of type svaunit_sequence_test is created behind the scenes, in which the sequence with the given type is instantiated, randomized and started. The newly created test class is a specialization of svaunit_test by the sequence type.
Below you can see the definition of the sequence-specialized test class.

SVAUnit sequences are virtual sequences, meaning they can be used to control the execution of other sequences and to create a layered sequence topology. 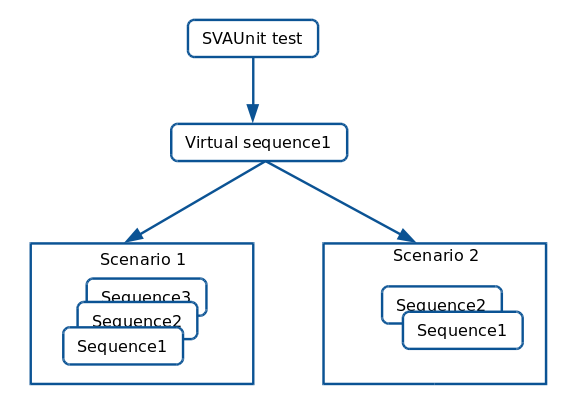 We changed the add_test() method into `add_test() macro to allow registering of both unit tests and sequences.

The `add_test(test_or_seq_type) receives as an argument the test or sequence type. When a sequence type is used, a svaunit_sequence_test#(type SEQ_TYPE=svaunit_base_sequence) is created, where SEQ_TYPE is the same as the macro argument. The newly created test’s name is the sequence’s type.
In case similar type sequences or tests need to be registered, the framework handles duplicates automatically and the resulting unit tests are named as shown below:

Users required to support complex topologies like several instances of the SVA container interface in one module and/or nested interfaces.
Starting with SVAUnit 2.0, the API supports addressing an SVA either by its name (in case there is a single instance of an SVA container interface) or using the SVA’s full path.
Let’s consider the following interface topology. 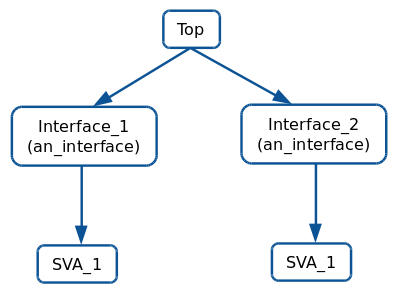 The SVA named SVA_1 can be address either as SVA_1 or Top.Interface_1.SVA_1, where Top is the module name used as a top, the Interface_1 is the instance name of the interface containing SVA_1.

This API upgrade allows verification of SVAs located in interfaces under deep topologies, like the one below.

In order to provide access from both test and sequences, the entire SVAUnit API is now available using a wrapper class of type svaunit_vpi_wrapper, which inherits uvm_object. The wrapper enables access to the API from the test, sequence or sequencer through the vpiw handle, as shown in the following example.

The reporting API is accessible as before.

Beginning with the current version, SVAUnit 2.0, the pre_test() task has been deprecated. All signal initialization can be done at the beginning of the test() task, or respectively, inside the pre_body() or body() sequence tasks.

We have used the Verissimo SystemVerilog Linter to perform a thorough audit of the SVAUnit code sources with regards to the SystemVerilog and Universal Verification Methodology (UVM) coding requirements.
This reinforces our commitment that SVAUnit is a fully UVM compliant package.

AMIQ presented SystemVerilog Assertions Verification with SVAUnit paper at SNUG/UK-2015 and SNUG/Germany-2015. Both presentations were very well received by the audience, raising lots of questions. Many Thanks! to Andra Radu and Ionut Ciocirlan for their high quality work.

Where can I get the latest SVAUnit version?

You can download the latest version of the SVAUnit package from AMIQ’s github repository.

What are the next steps?

We encourage you to send us your feedback as we intend to maintain the SVAUnit library in sync with real life requirements.

SVAunit is a framework that targets SVA (SystemVerilog Assertions) verification in an isolated, simplified and standardized manner.
In April, following the presentation at CDNLive EMEA 2015, AMIQ released the first version of SVAUnit, SVAUnit 1.0. More details can be found in this article.

How To Optimize Disk Space When Running Regressions