We do pre-silicon verification in multiple iterations, each iteration including at least a regression. Regressions consume a great deal of HW resources (e.g. CPU time) and SW resources (e.g. licenses) and… a lot of human effort. This is what usually happens when we run a regression: we aim to reduce the time spent in regression analysis, especially when we run regressions at a fast pace, for example overnight. We want to see the results in a simple, easy to read report, as soon as possible. We are eager to start debugging issues immediately, instead of aggregating and organizing those tons of information resulting from running a regression. We expect everyone in the team to keep up to date on the regression status with virtually no effort. And in the long run, we want to have a history of regression’s progress.

What I want to show you below is a different way of dealing with these challenges using practical regression automation scripts. The scripts helped me and my teammates approach regressions more effectively and save a lot of time.

Preparing regression: I write an input file for the regression tool. This file specifies testcases, number of runs, seeds, how many testcases to run in parallel and so on.

Running regression: I launch the regression tool passing it the previously prepared file. 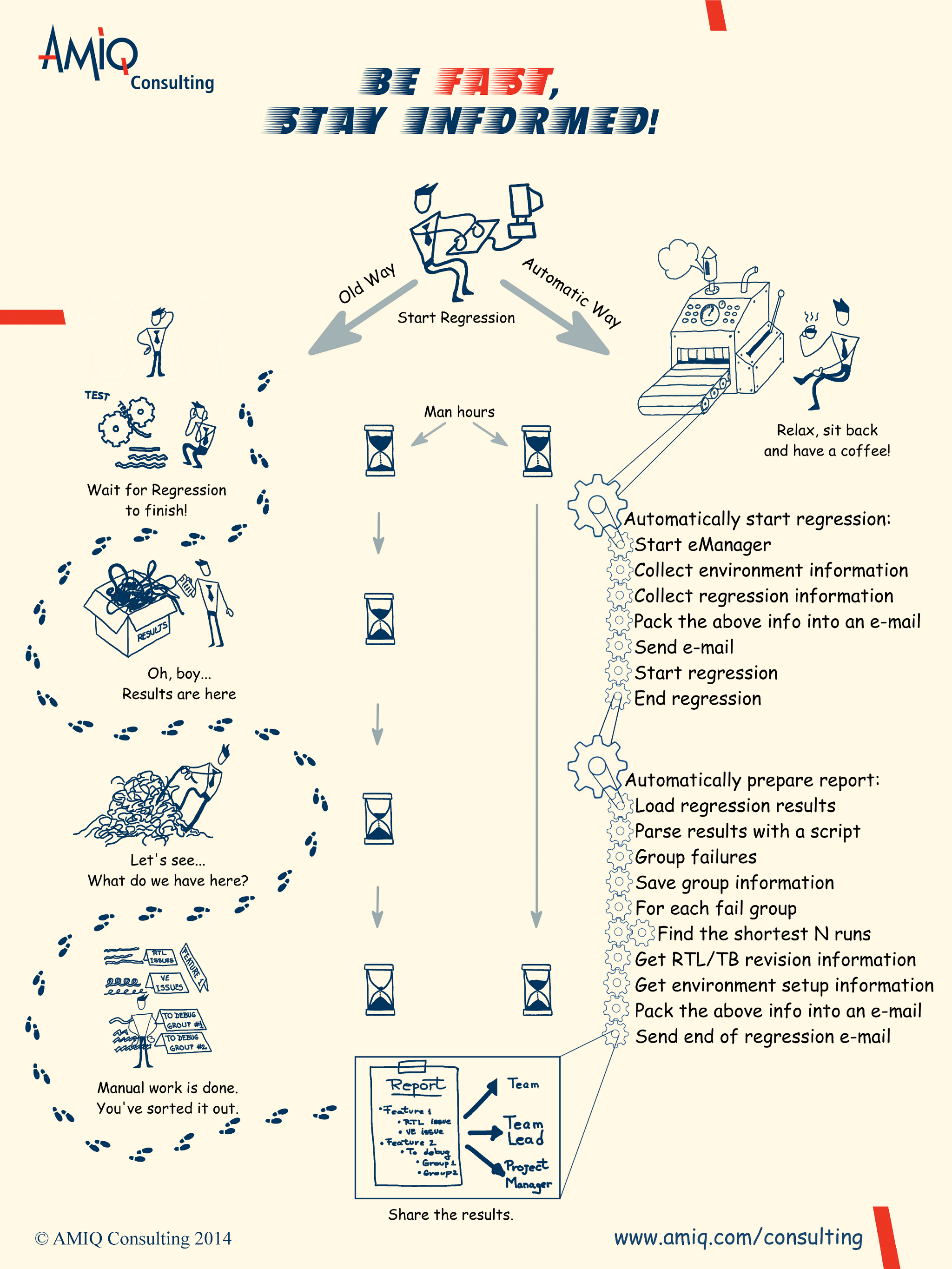 I automated the above Eyeball analysis and failure reproducing phases with two scripts:

You may download a couple of example scripts and email templates here. They work with Cadence Incisive Enterprise Manager and Mentor Graphics Questa Verification Management.

The start regression email has an easily recognizable subject and it contains the regression path, system environment information, revision control labels or tags – both of RTL and verification environment, a list of locally modified files, and in general any information that could be relevant to reproduce a test run.

The end regression email has an easily recognizable subject. In addition to the information found in the start regression email, it contains the total number of runs, the number of passed and failed runs and the list of failure groups – including the three shortest runs for each group identified by testname and seed.

This is great article!!!

it was indeed a great article .

It would be a great help , if you would give me following iinputs from your side

Hi, Rajivdesh.
If you look at the analyzed_failed_rerun.sh you will see it contains a reference (it makes use) of vm_analyzer.e

These are hooks inside your regression manager tool.
For example in vManager there are these vsif attributes called: pre_session_script and post_session_script.

The above scripts work with Emanager in cadence which is an outdated version .

Hi, Rajivdesh.
I don’t plan to update those soon.
The scripts are Open Source: you can modify them and contribute the solution for everyone in the community to use.
Check it out on our GitHub-link