AMIQ sponsored the RoboLab team participation in the 7th edition of Robochallenge which took place in the main hallway of the Central Library of University Politehnica Bucharest, on the 9th of May, 2014. 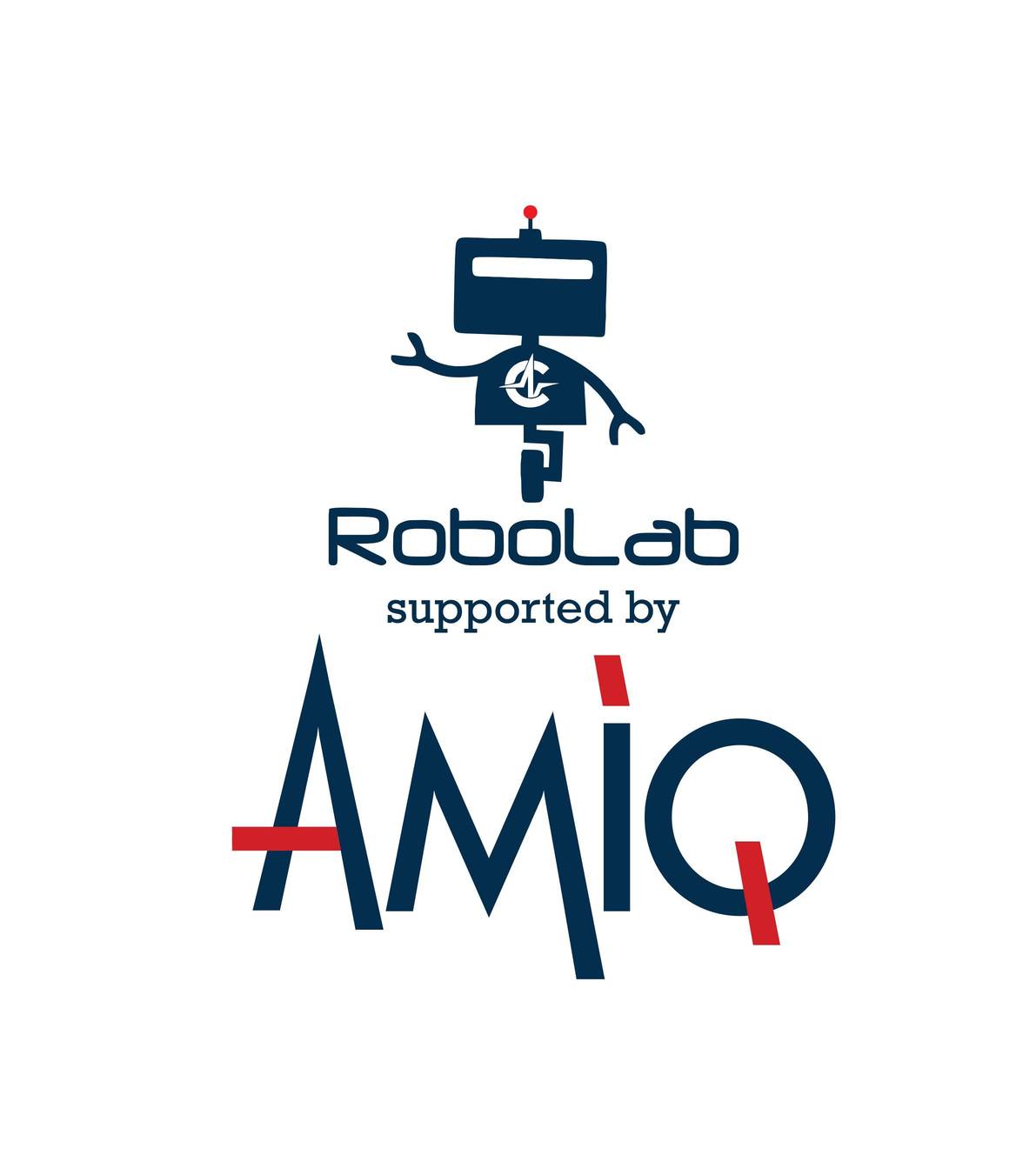 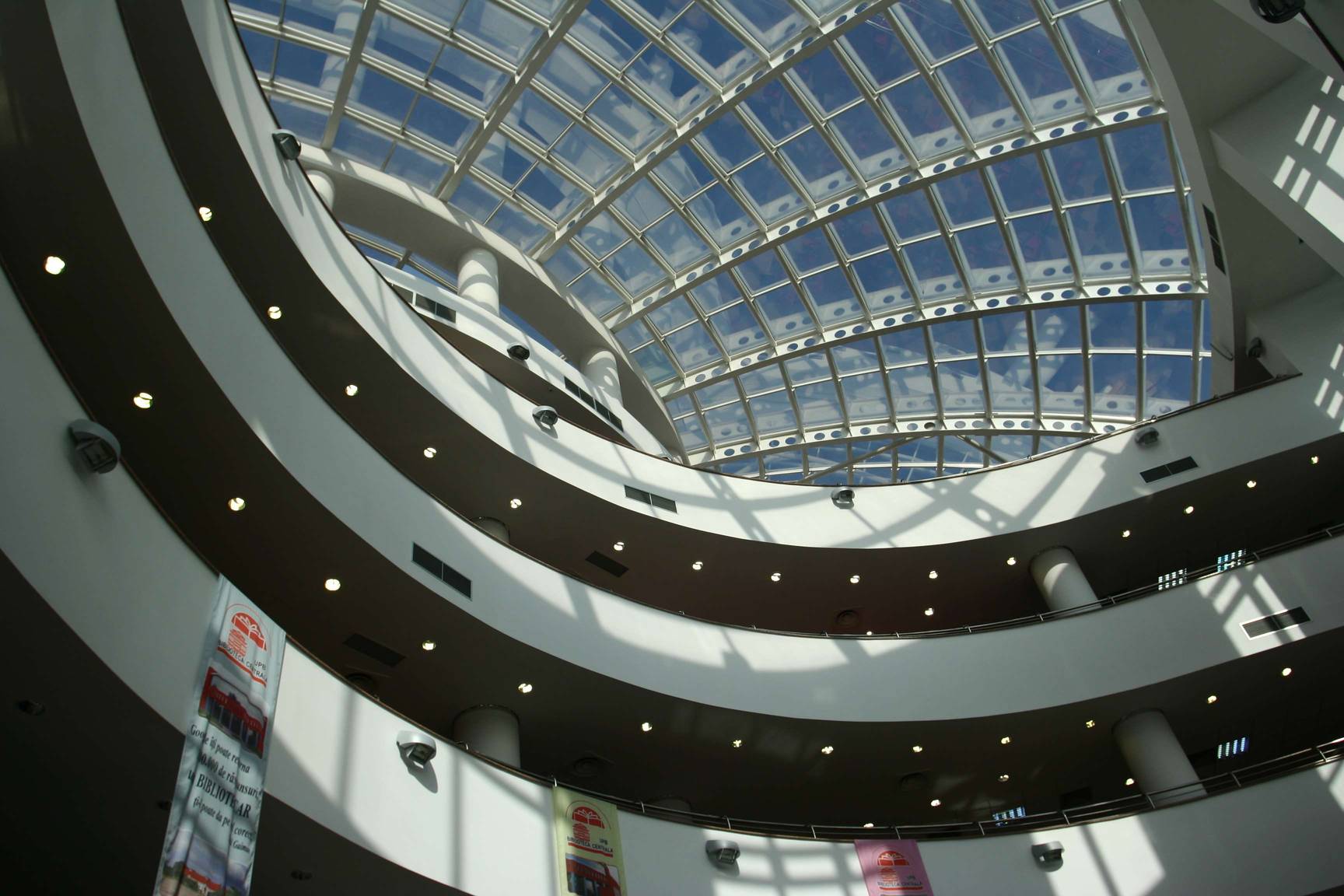 The football field where the contest took place was available to all teams throughout the day and night before the contest. 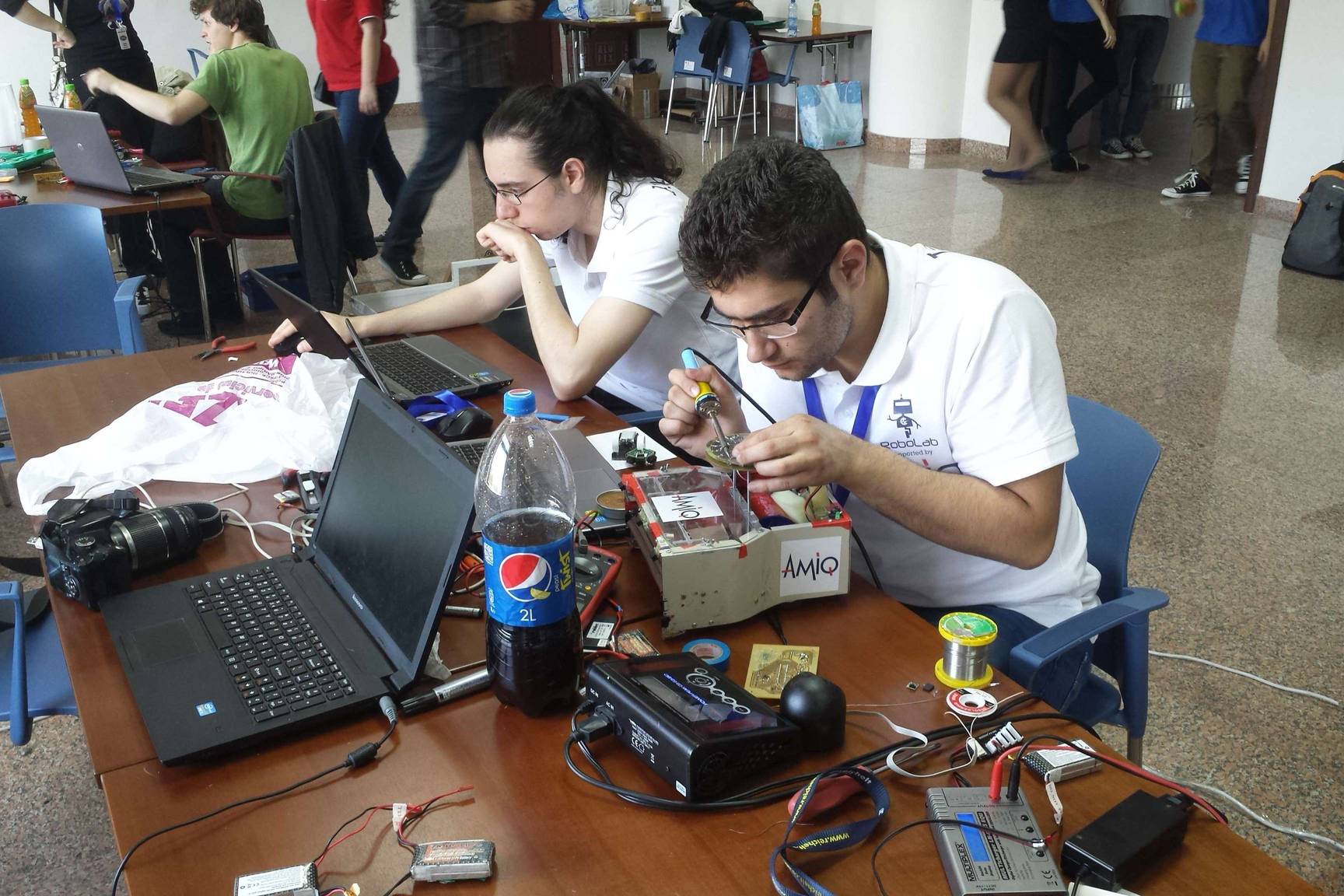 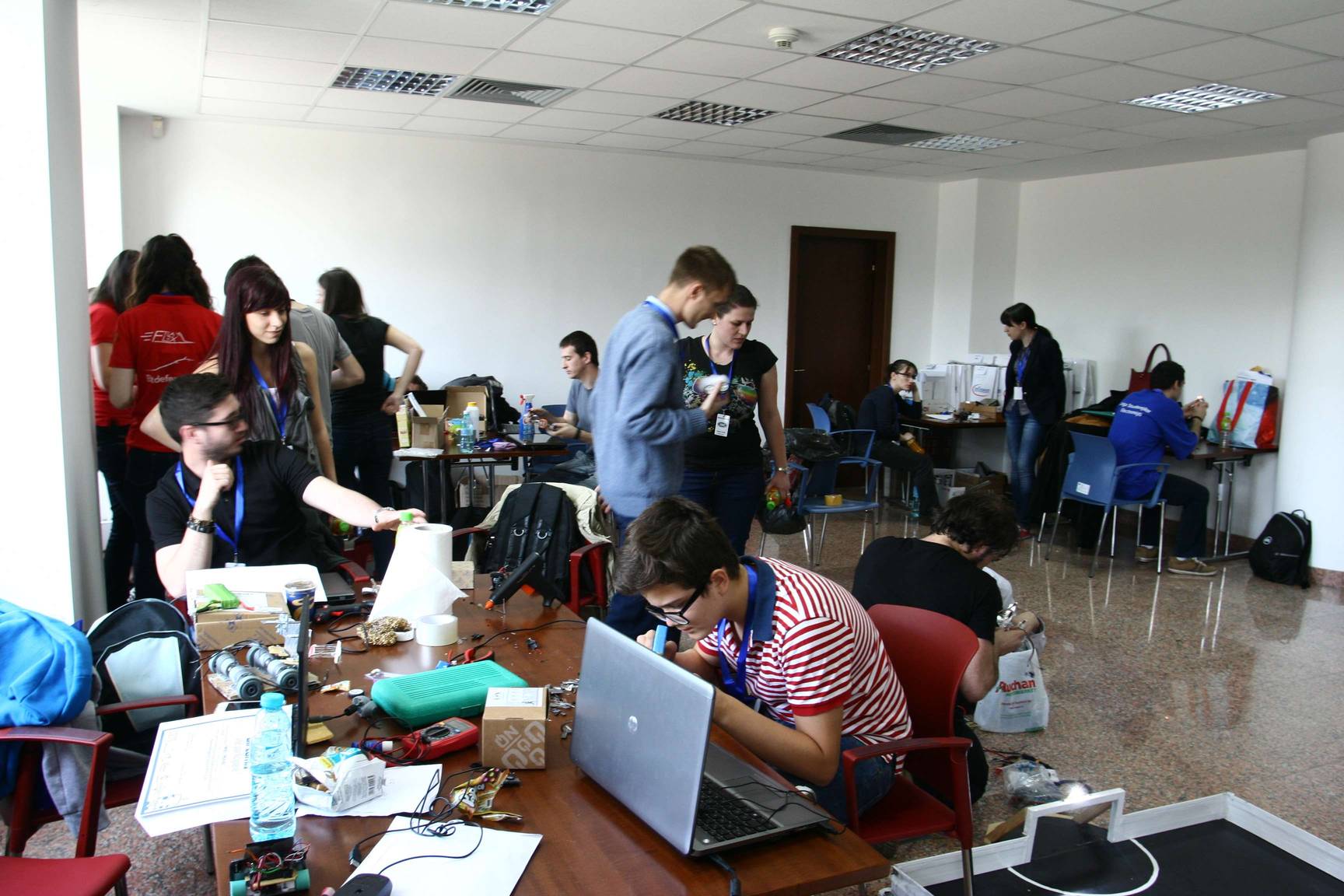 The RoboLab team spent the night on campus tweaking and adjusting the algorithm of their robot. The lack of sleep took it’s toll and the team was not very confident the following morning. However the passion kicked in, compensated for the sleepless night, and the team managed to mobilize and finalize the adjustments. 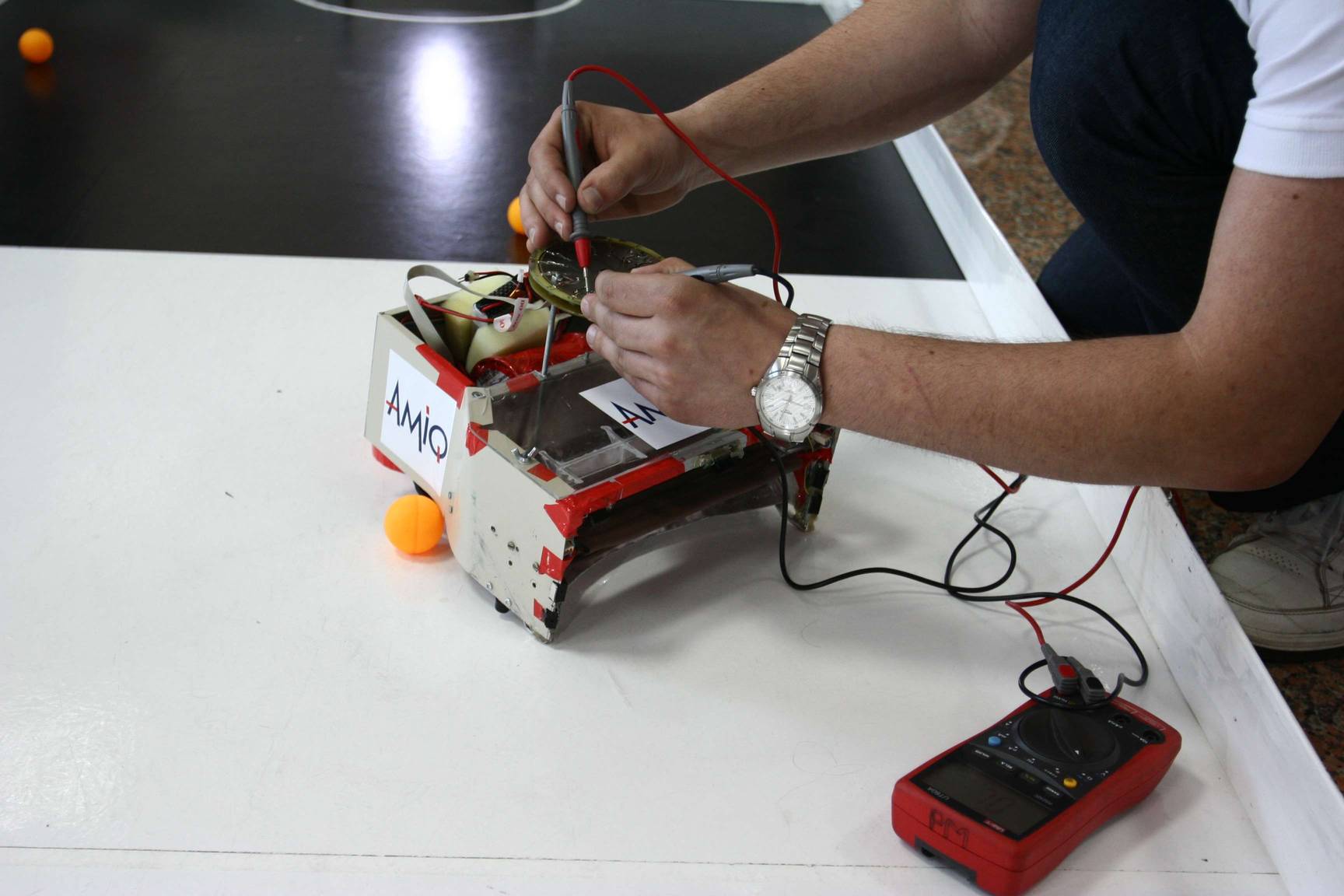 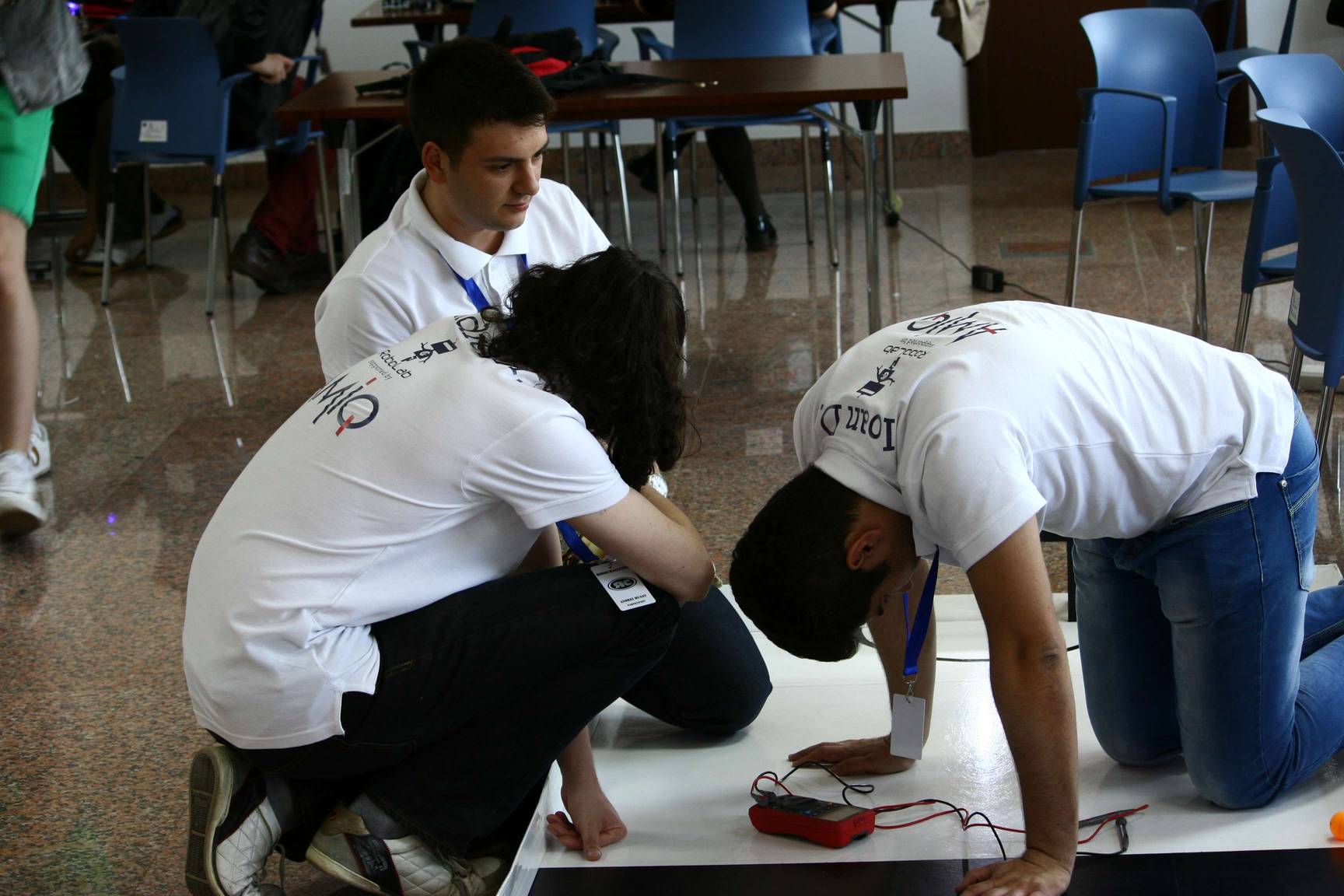 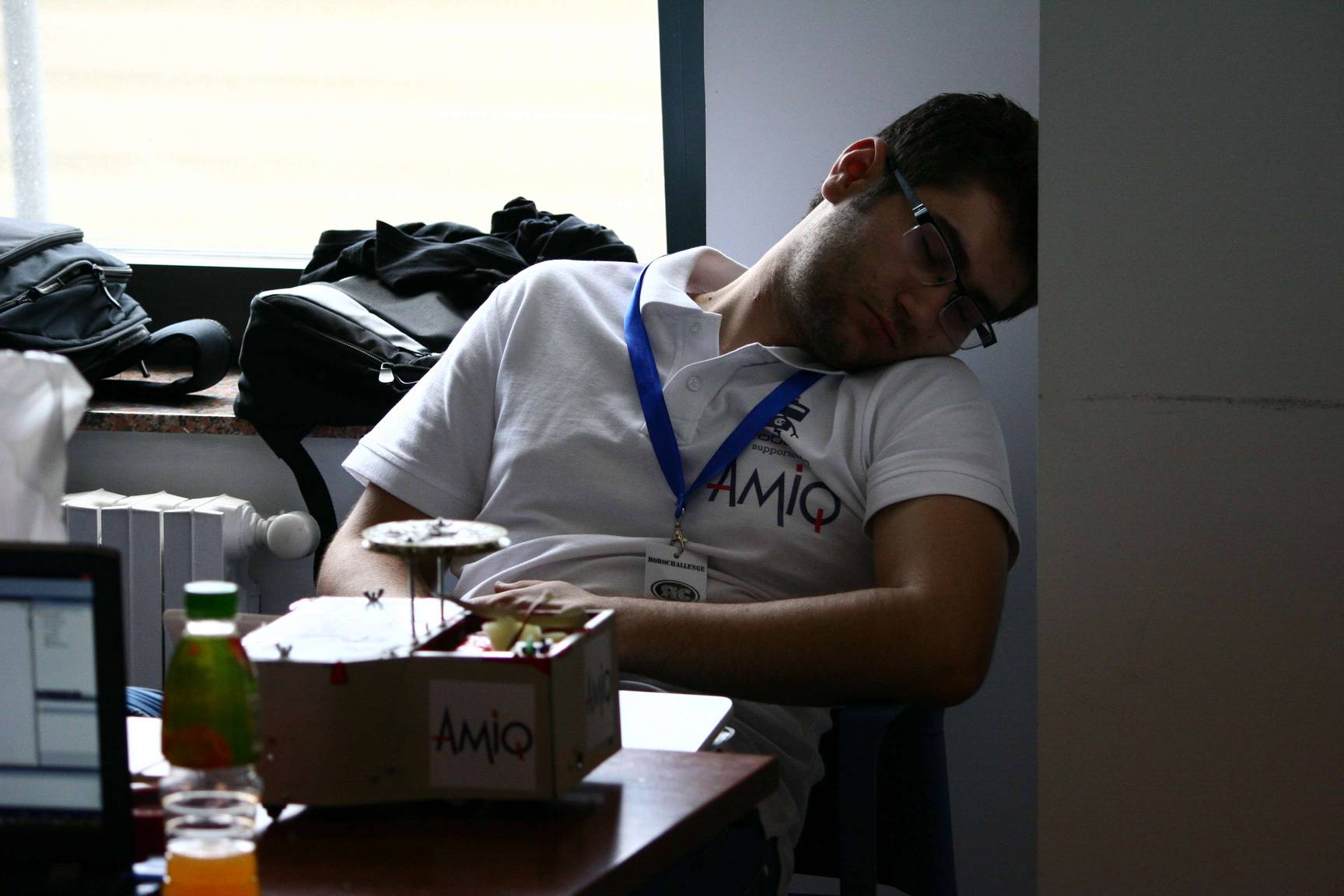 The first challenge was the Micro-Sumo, with robot Robo Warrior 1, where the RoboLab team reached the quarter finals. 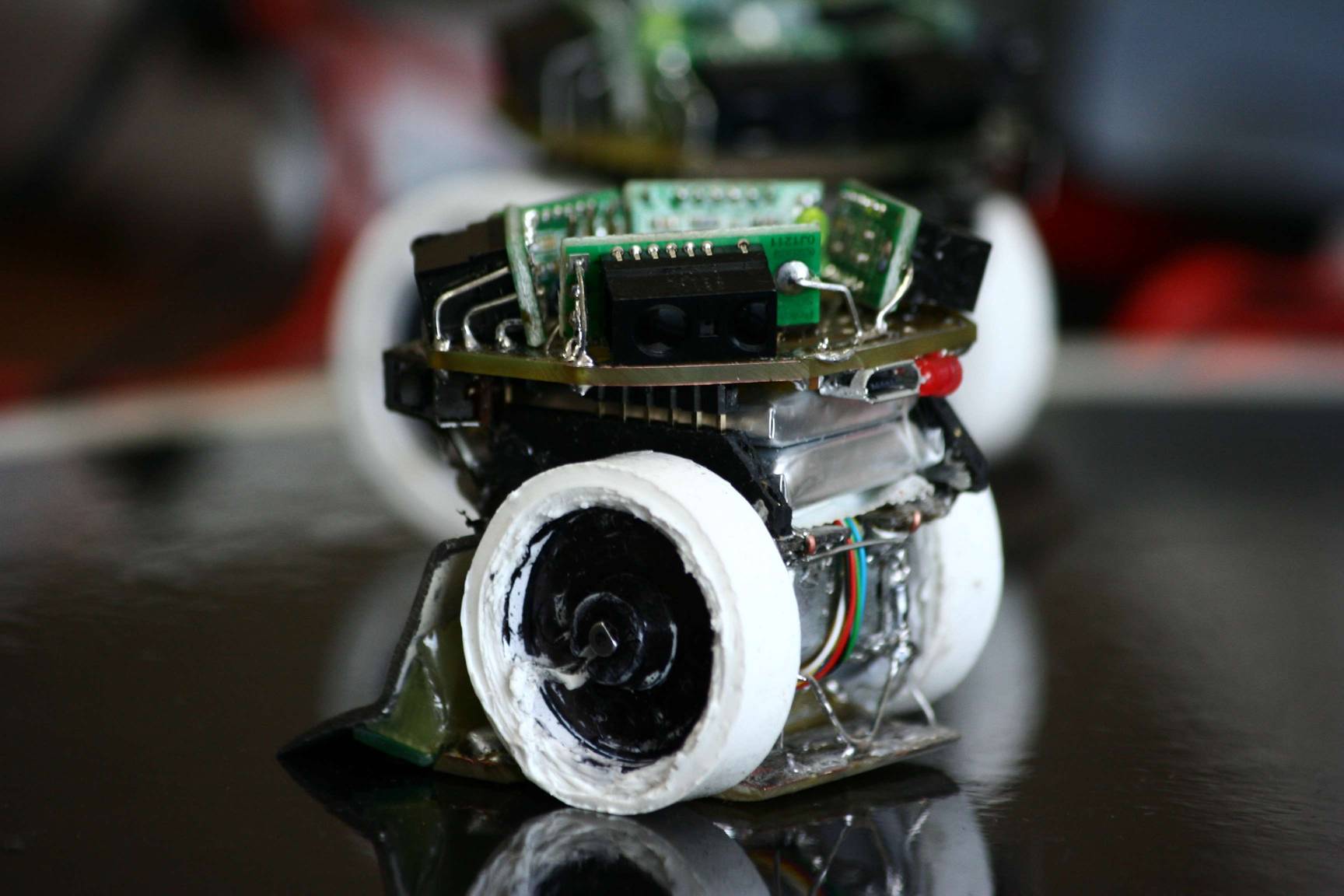 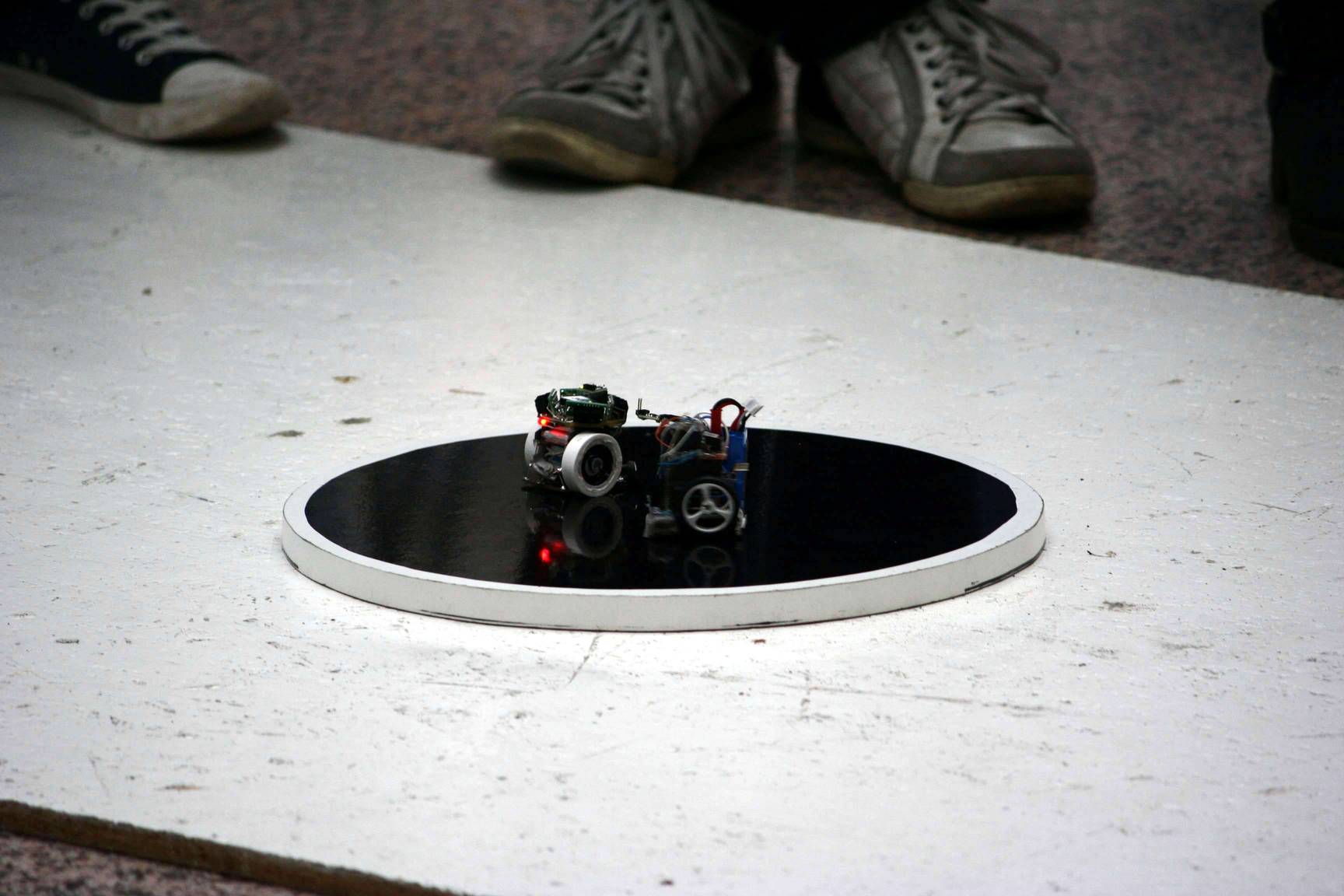 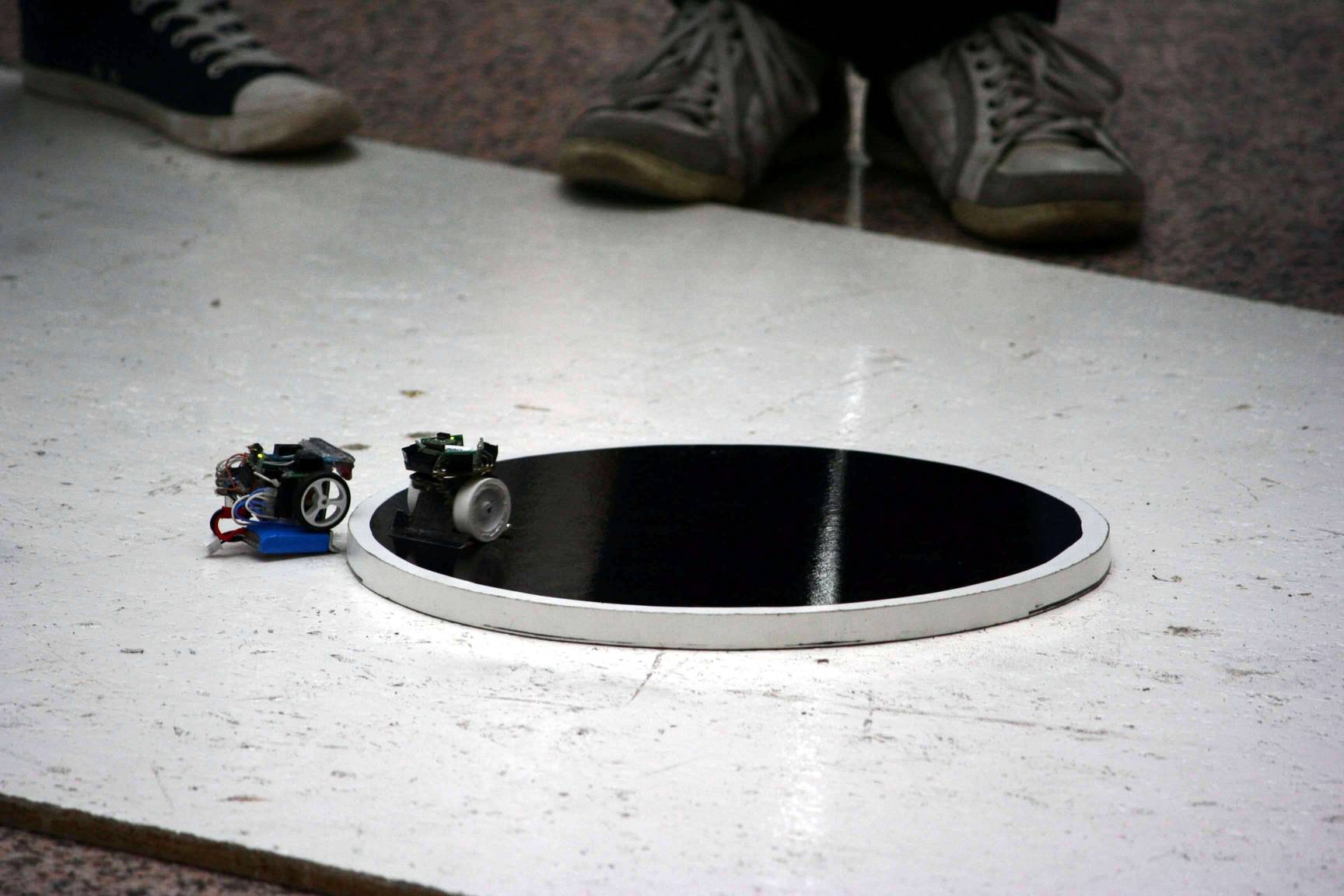 And here it is a sample of a round… well, “micro-round”:

Despite having spent an entire day and night adjusting the robots, the competition day was not so smooth. A few electronic components collapsed and required the team intervention. The first component that stopped working was the IR receiver. Its function was to remotely start and stop the robots, so repairing it was crucial. The second problematic component was a motor driver. With a puff of black smoke it rendered one of the micro-sumo robots unable to move, less than an hour before the trial. 15 minutes later, thanks to a hot soldering iron and some well prepared spare parts, everything was once again up and running.

The second challenge and by far the toughest to compete in was the fairly new Robo Football, with the robot Iron Foot.
The basic rules are:

There are a few aspects that make this challenge harder than the others:

The challenge is extremely fun and rewarding. Being able to see your robot do all its tasks at once and score a multitude of goals while dodging the opponent is a great sensation. Even more, sometimes the bugs which can appear in the AI produce funny or unexpected situations: 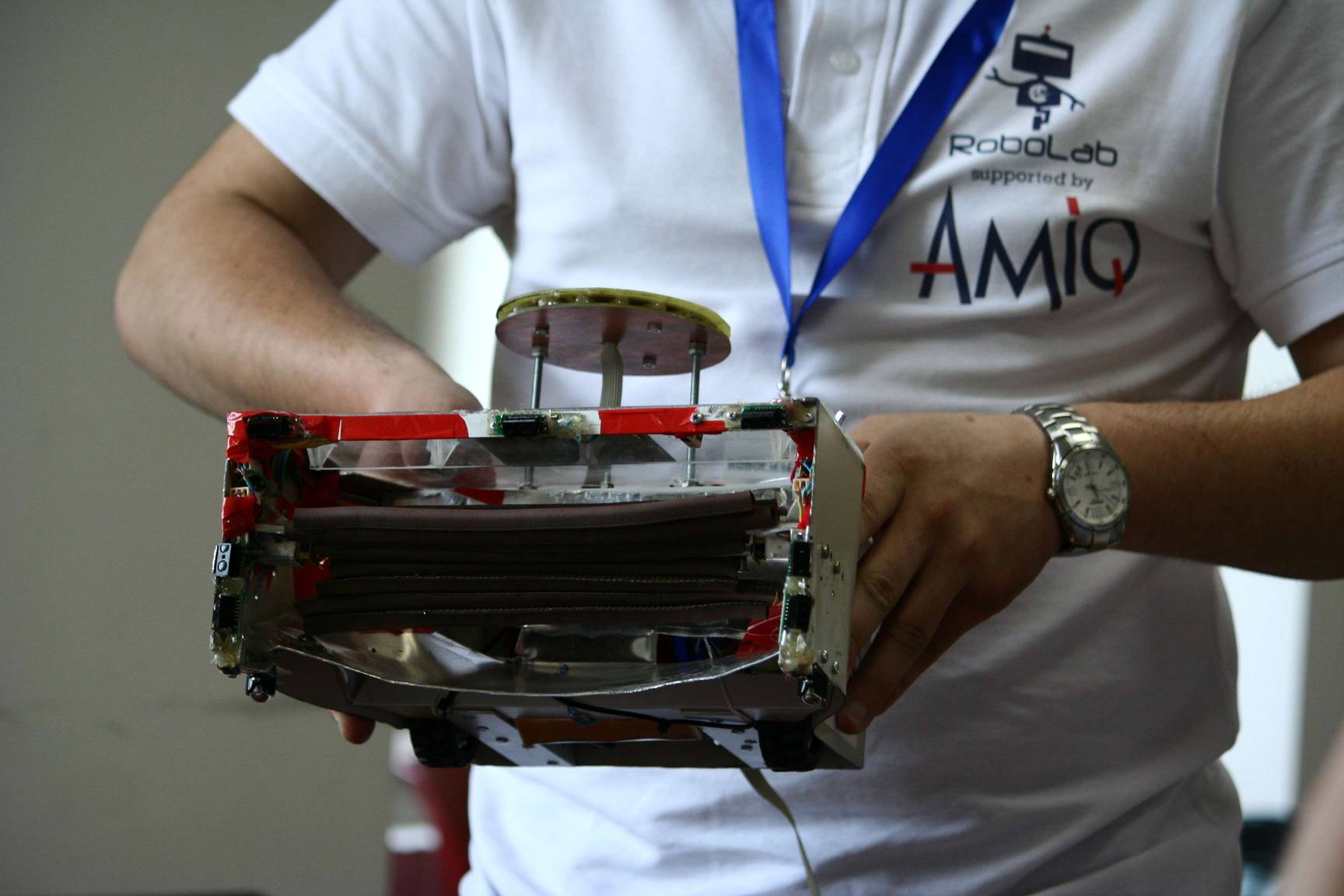 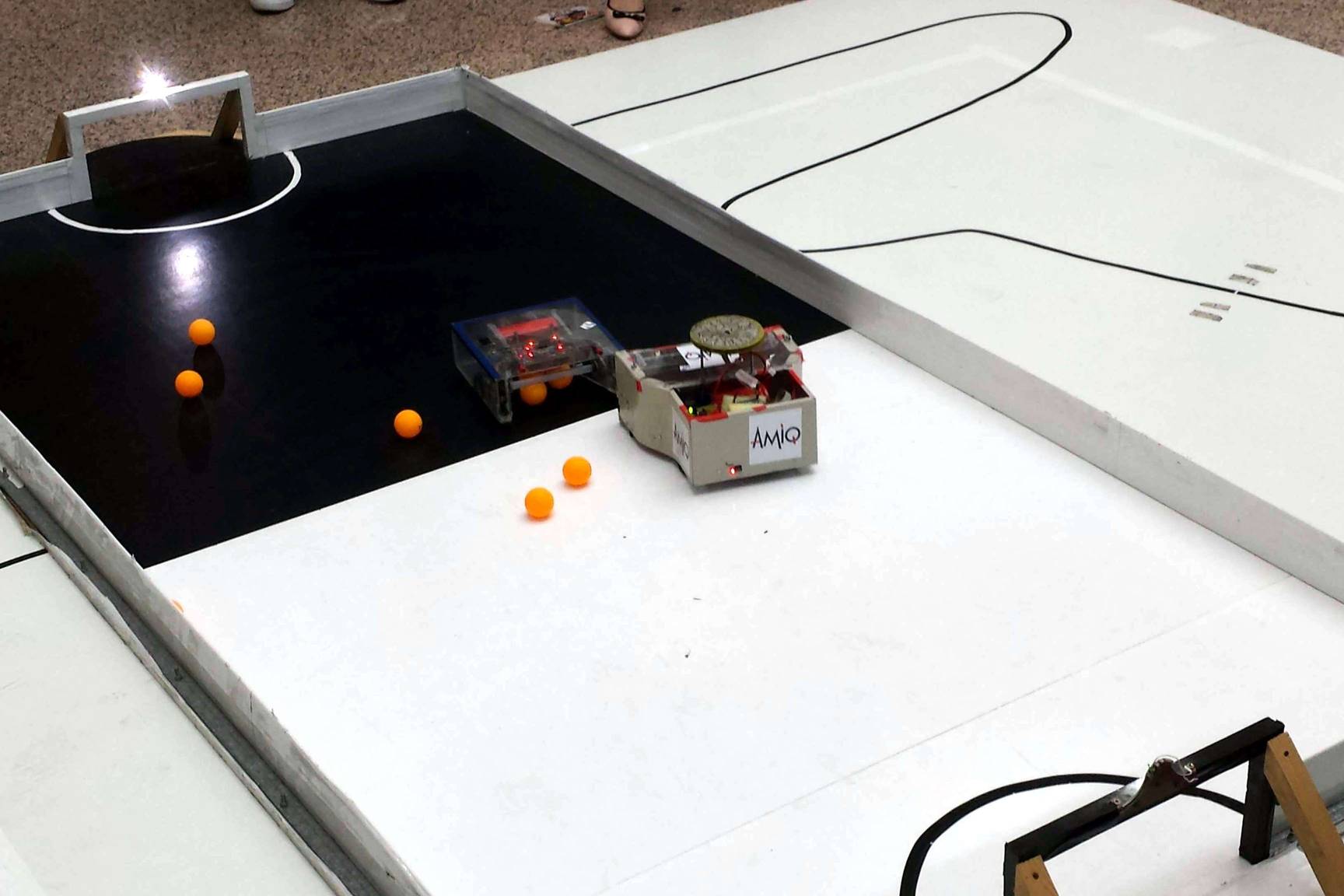 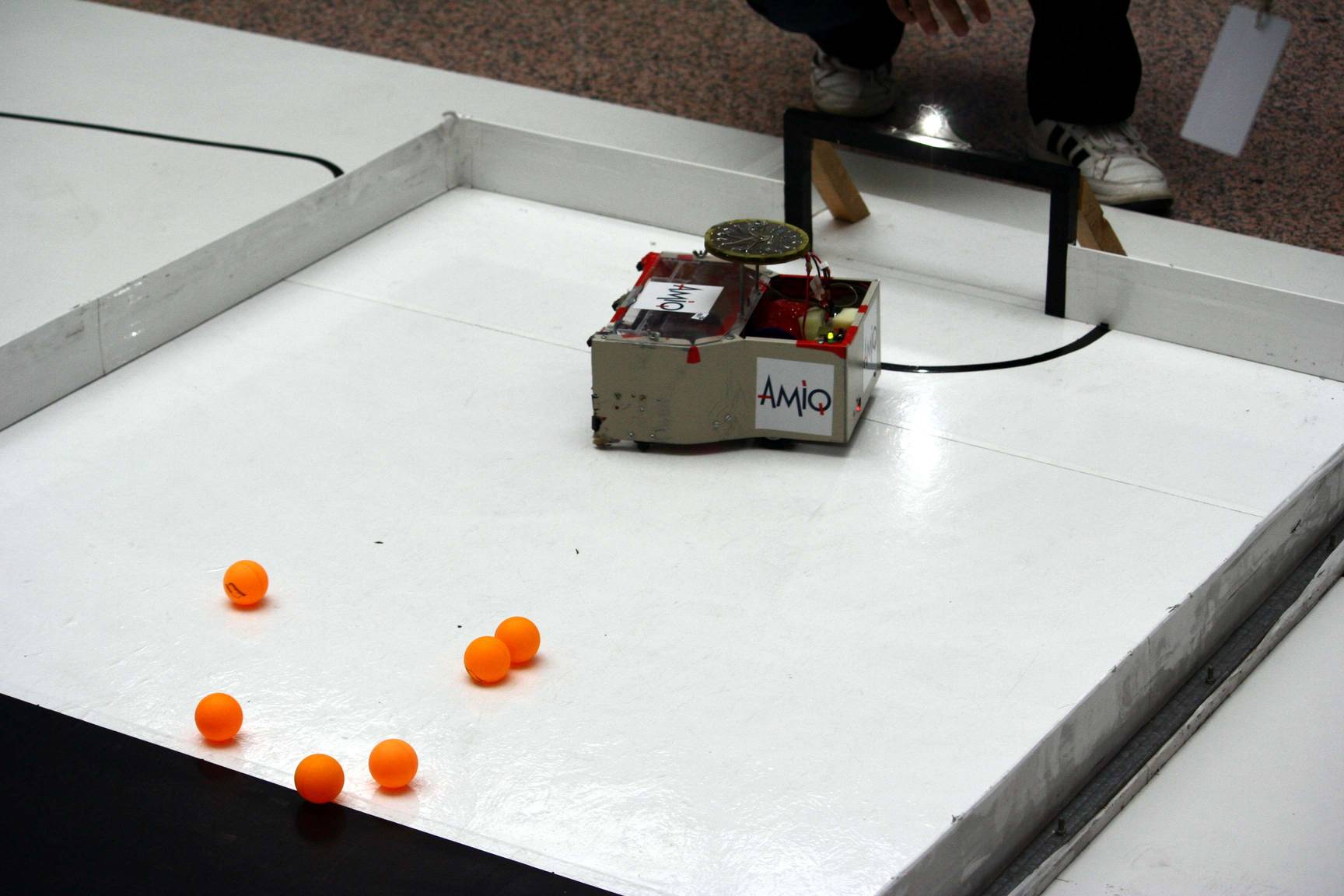 It was a clean victory, all other competitors were left far behind. 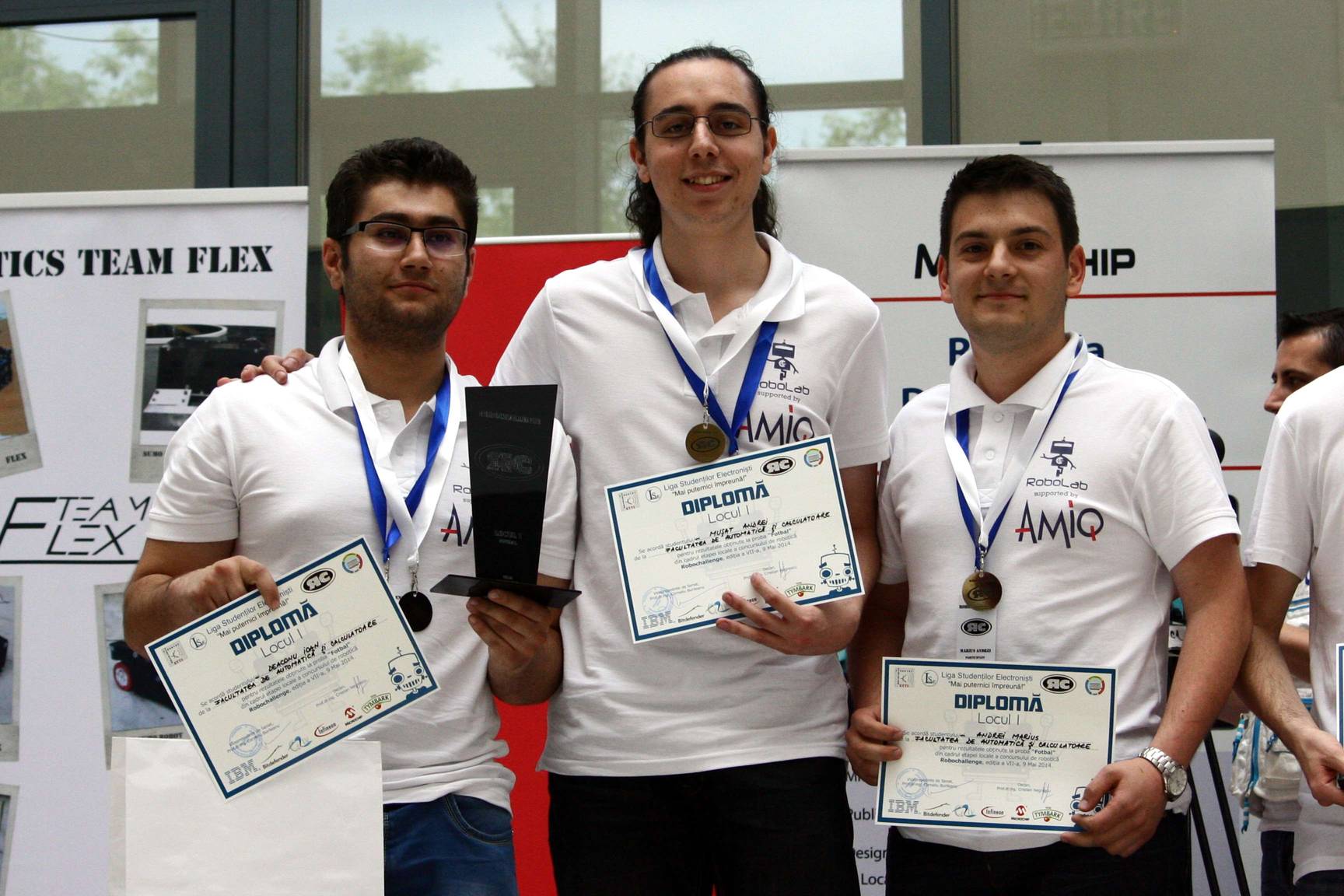 The final challenge was a technical presentation where the RoboLab Team won the 2nd place. The goal of this challenge was to write a technical paper and then present it in front of a jury. The paper had to include details about the robot’s mechanical, electronic and software components, as well as notable features which distinguish it from others. At the end of the presentation, the jury would hold a 5 minute Q&A session in which they would ask for further details regarding the build process, some key features of the robot and concepts applied in the creation of the machine. 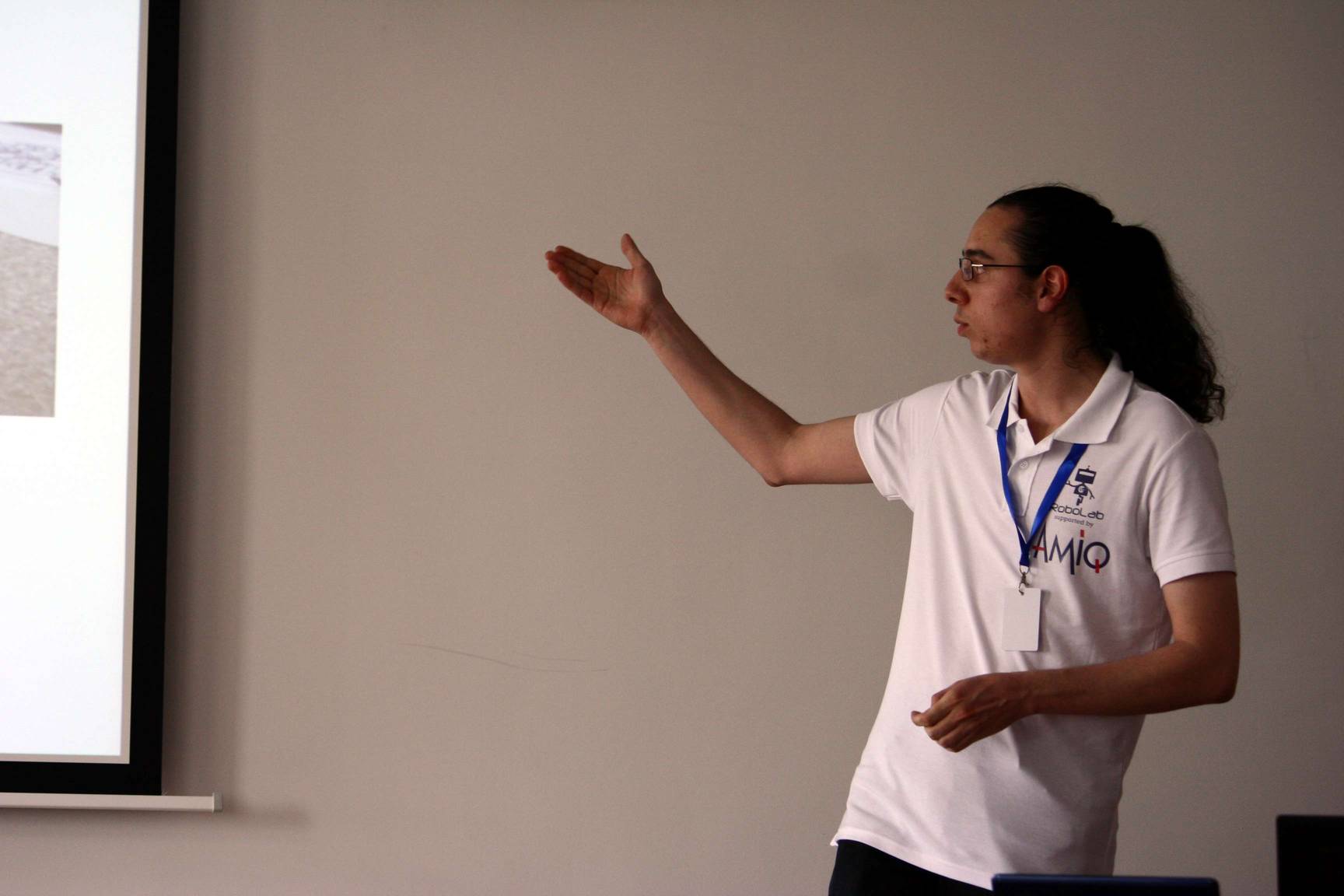 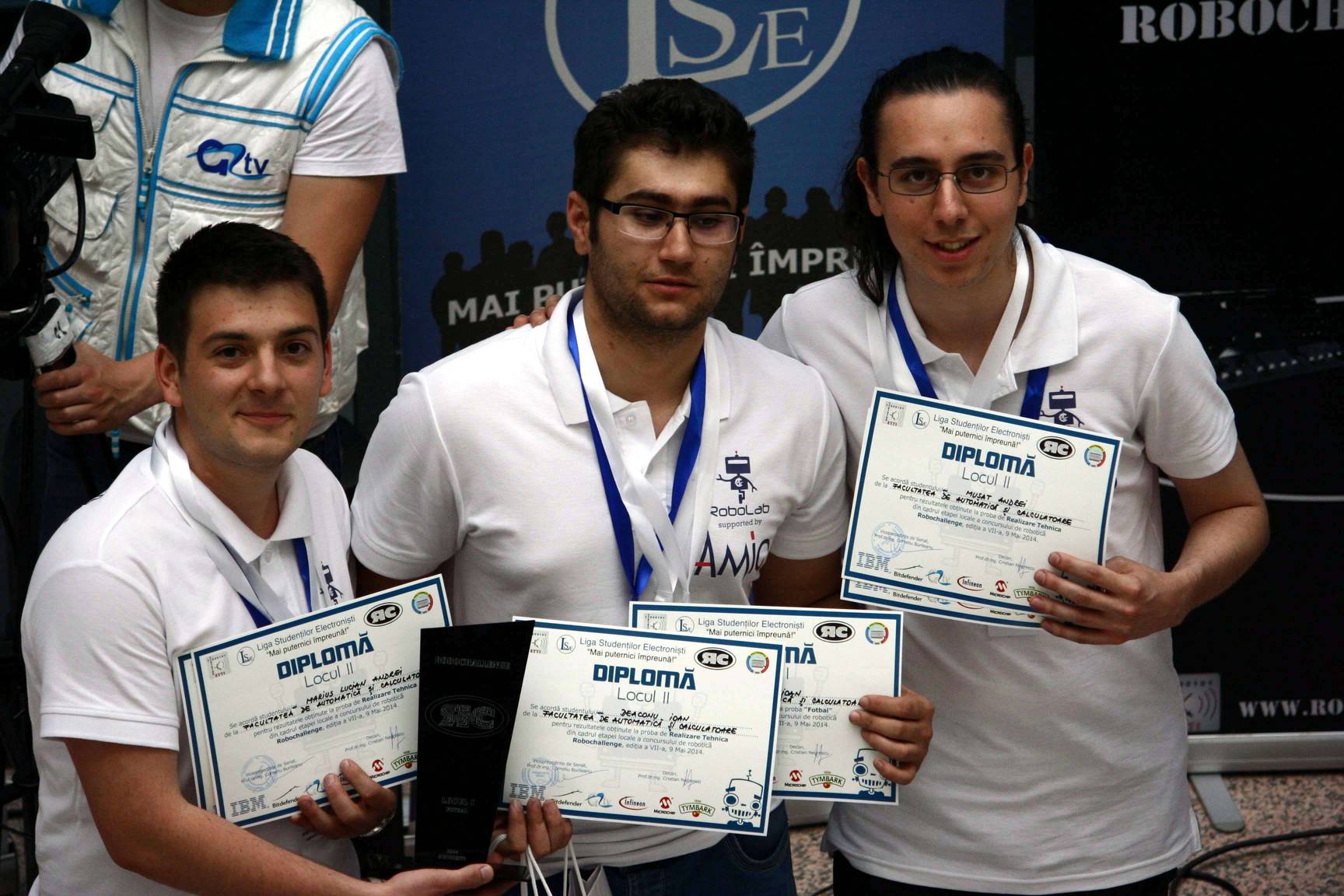 The overall atmosphere of the contest was intense or relaxed, depending on which side of the arena you were. Teams and contestants of all ages, from high-school students to university undergraduates, were constantly fussing around, moving from the arena to the maintenance stands and back again. Everyone was energized and focused, hoping that their robot would prove itself the best in its category. On the other side, the public was truly impressed by the performances. Both adults and children were admiring the display of machines in the arena and cheering for their favorites. The library hall was constantly filled with commentaries, shouts, cheers and the sound of hands clapping.

About the RoboLab Team

The RoboLab team has three members: Andrei Musat, Ioan Deaconu, Marius Andrei. They are all students at Automatics and Computer Science and they share the passion for robotics and programming. Team is mentored by Dan Tudose and Andrei Voinescu.
The guys are waiting anxiously for the next phase of the championship in order to face new opponents with newer and better robots. ‘Till then, as preparation, both hardware and software upgrades will be performed, to make the robots more agile and intelligent.

Robochallenge is a championship divided into different kinds of challenges, in which autonomous home-made robots either compete against each other or have to perform various tasks in order to achieve a certain goal. This year’s competitions included: maze, line follower, micro/mini/mega-sumo and football. Although this competition implies robots and electronics, it has already piqued the interest of many individuals from other areas of expertise.